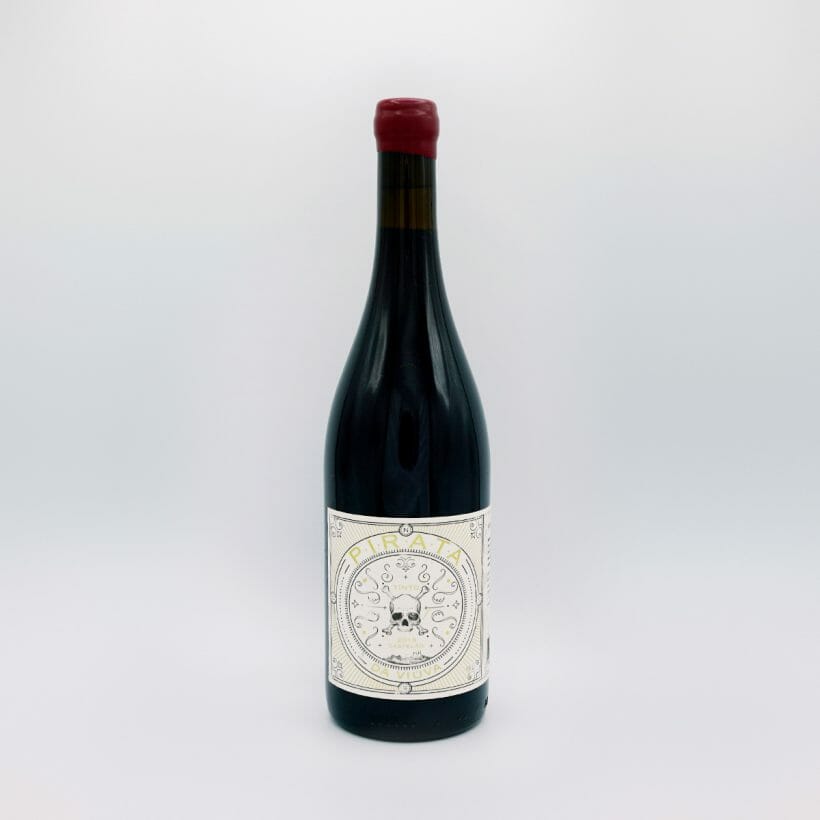 Pirata da Viúva – Illustrates the new discoveries on the Atlantic coast of Sintra. An irreverent wine from selected plots, sustained on free vines and winemaking.

“Castelão is one of the single varietals I always want to have in the Pirata series. It is an underrated variety in Portugal, but I believe in Colares develops an incredible profile – low alcohol, spicy, light, acidic and fine tannins.

This 2018 is a pure reflection of the year – hard. Late rain, low temperature in general, with a heat wave in the middle of the summer.”

Winemaking: Organic, Grapes are hand-picked, Alcoholic fermentation and aging in stain-less steel, whole bunch and indigenous yeasts. No addition of commercial oenological products, with the exception of a small amount SO2.

Taste: Bright and open red-color wine. Green-forest aromas and pepperish hints. In mouth is crispy, assertive tannin, light wild berries and iodine due to the salinity.

Adega Viúva Gomes, established in 1808, is located in Almoçageme, Colares, on a demarcated wine-growing region defined in 1908, characterized by its dunes and sandy soils sited on the coastline of Sintra, between the hills and the Atlantic Ocean, from Cabo da Roca until Magoito. Colares has been connected to the wine for centuries, there are registers that wine was produced in this region since the Roman Empire. After, in 1230, the King D. Afonso III, as a landlord, demanded the plantation of vines.

The Colares Wine-growing Region became well known by the end of the XIX century, most precisely in 1865, when the biggest threat of wine history arrived to Europe – Phylloxera. This tiny insect, original from the American Continent, was arriving to Europe alive when trips were shortened by the introduction of steam engines in boats. Colares’ vineyards were resistant to phylloxera due to roots’ deepness in the sand, 8 meters in some cases, where the insect could not reach.

Today everywhere in Europe, except in the sands of this region, the use of the American plant (resistant to the insect) was adopted, grafted with European grape varieties.

At Viúva Gomes we put all our passion in the wines we create. They are an extension of our personality, of our beliefs and personal taste. We believe in genuine wines, linked to their original place and terroir, promoting minimal intervention in the winery.

Today, a project of father and son, 4th and 5th generation, we aim to maintain the traditional Colares’ Wines.

Nevertheless, we will be creative, seeking and exploring new paths, guaranteeing the sustainability of this singular wine-growing to the most.